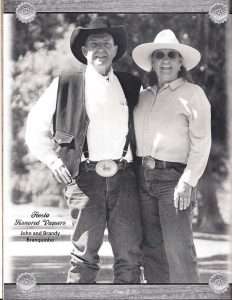 John and Brandy met in the fall of 1969, they were married August 5th 1972. They have 3 boys Tony, Casey and Luke, who are all married to their wonderful wives Sharla, Nicole and Lindsay. They have nine grandchildren, Cersten, Kylee, Blake, Betty, Trinety Taylor, Cade, Jameson and Bear. The grand kids will all be competing this weekend.

John and Brandy were both raised in north Santa Barbara County, where they lived and learned the western way of life. Both from long time ranching and farming families, they introduced the rodeo way of life to their boys, when they were old enough to start competing. John has been competing in the Fiesta Rodeo since he was 15; Brandy started competing here when she was 19. The boys started competing here in the junior events and now the grandchildren are following in the families footsteps.

John is a 3rd generation Californian with his grandparents coming to the Santa Maria valley in the 1800’s. John was raised in Gary by his parents John and Ellinore, who farmed and raised cattle.

Brandy is a 5th generation Californian as her great great great grandfather was
Jose Francisco Ortega, the first captain of the Santa Barbara Presidio. She was raised in Los Alamos, by her parents Bill and Nancy Luton.
The kids, John and Brandy have always love having them come help on the ranch and in the arena, many of these now young adults are now running this rodeo. They are now teaching their children may of the traits they learned from John and Brandy. The children are our future and John & Brandy love passing on their heritage.

Family, Friends, and the Western Way of Life! There is nothing better.

Thank you and Happy Trails